The Boys Race at the Union County Championship produced a big upset as No. 13 ranked Union Catholic, behind individual champ Myles Plummer and a some huge PR’s, threw down a stunning race as the Vikings won its first county title ever by knocking off NJ #4 Westfield and No. 8 Summit.

UC averaged 16:53, put its first five runners in the top 15, and finished on top with 38 points. Westfield, favored to win a sixth straight title, was second with 49, and Summit placed third with 53. Rahway was fourth with 103, it’s highest finish in more than 50 years!

It’s the biggest XC victory in school history for the UC boys, and it was quite a turnaround for the Vikings, who fell to Summit, 25-34, at the Union County Conference Championships on Oct. 22 at Warinanco.

UC coach Mike McCabe has maintained all season long that his guys had the potential and the talent to be the top team in the county. But they had to put it all together on the same day for that to come true.

That’s exactly what finally happened as the Vikings ran their best race of the season when it mattered most.

How did it happen?

Granizo said all the guys finally clicked on all cylinders at the same time.

“All season we have been waiting for all of us to run our best at the same time, and it finally happened today,” said Granizo. “In all of our other meets this season, we’d have some guys have great days and some guys would have off days, but today we were all on. This is what we’ve been working for since I was a freshman, and its just a great feeling to finally be county champs.”

“Ever since I was third last year, this was my biggest goal for cross-country,” said Plummer. “And to finish first and help my team win our first title makes this even better.”

“Our boys team has never won a state title, so this is the biggest championship we’ve ever won,” said McCabe. “The guys up front, Myles, Shane, and Matt, gave us the strong races we needed, and Caudell and Sam came through with their best races for us.”

The UC boys have been agonizingly close to winning in the past, including in 2016 when the Vikings placed second to Westfield, 45-51.

“This has been a championship that we’ve been close very close to winning in the past, so it made us really want it even more, and the guys have been very motivated to finally get this. I’m relaly proud of the way they ran.” 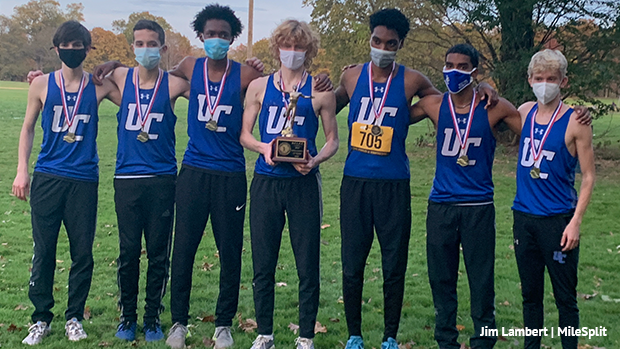