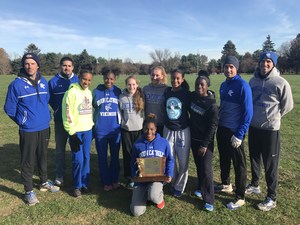 Holmdel, N.J. – The Vikings edged Red Bank Catholic, 63-65, to win the state Non-Public A title on Saturday at Holmdel Park
By Jim Lambert
Trailing with a half mile to go with a state title hanging in the balance, the Union Catholic girls cross-country team dug down deep and staged a dramatic rally to edge Red Bank Catholic in thrilling fashion to capture its second NJSIAA Non-Public A title in three years on Saturday at Holmdel Park.
Junior Jerika Lufrano led the charge for the Vikings by placing second in a school record 18:51. Sophomore Leena Morant (9th in 20:15), junior Megan McCabe (15th in 20:32), sophomore Zamira Ysaac (16th in 20:32), and sophomore Zoe Lee (21st in 20:46) were the other scorers for UC, who all ran very gutsy over the final 800 meters to help the Vikings come from behind for a heart-pounding 63-65 victory over defending champion Red Bank Catholic. Sophomore Ashleigh Patterson and junior Monika Wlodarski were the No. 6 and No. 7 runners for UC.
A couple huge keys to the victory were that Morant finished two places and one second in front of an RBC runner, and Lee was one place and one second in front of another RBC runner. Lee, who fractured her tibia at the Group Championships at Holmdel last year, picked off three runners, including two from RBC, in the last 800 to help seal the race for the Vikings
The entire top five for UC, who averaged 20:11 (No. 2 in school history), ran significantly faster than they did at the Shore Coaches meet at Holmdel last month when the Vikings averaged 20:50.
“The girls raced as a complete team today,’’ said UC coach Mike McCabe, whose 2015 team won the first girls state title in UC history. “I’m extremely proud of how they raced for one another. It was a great win over a very strong team. We ran some runners down and held some off. It’s the best we have closed. Finishing is all about heart and they showed so much grit.’’
The victory was especially sweet for Megan McCabe, who has regained her form after battling through some iron issues and was a huge difference maker for the Vikings on their road to the state title.
“I just stayed positive and kept working hard through it all and things worked out,’’ said McCabe. It’s so satisfying to be able to help my team reach this goal. It really feels great to put in all the work and see it all pay off like this.’’
With its victory, the UC girls advanced to the state Meet of Champions next Saturday at Holmdel Park where they will aim to break the school record average of 20:05 that the 2015 team ran at the Meet of Champions when the Vikings placed fifth.
Published November 12, 2017
Share

Great Racing from these girls in the 4x800 and 4x4