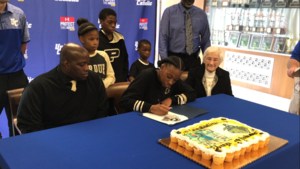 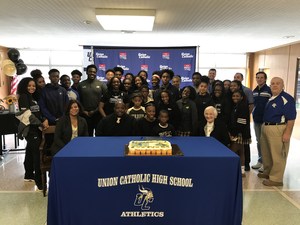 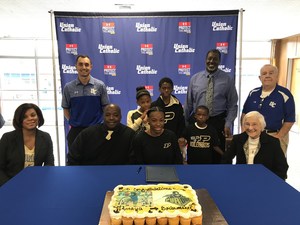 Scotch Plains, N.J. – Chadwick is one of the state’s best hurdlers and sprinters
By Jim Lambert
Amaya Chadwick of Union Catholic, one of the biggest track and field stars in New Jersey, signed a National Letter of Intent with Purdue University on Wednesday morning during a ceremony in the main lobby in the school.
“This moment really means a lot to me,’’ said Chadwick, who was surrounded by family and friends and teammates during the ceremony. “I’m grateful that I was able to work hard and make myself, my coaches, my teammates and my family proud. I really loved the atmosphere at Purdue, and I felt the school fit me socially, athletically, and academically. The whole signing thing is very exciting and I’m happy to finally make it official.’’
During her remarkable track career at Union Catholic, Chadwick has established herself as one of the best hurdlers and sprinters in New Jersey.
Chadwick, who lives in Plainfield, has captured seven individual Union County championships and seven state titles indoors and outdoors combined in the hurdles and the sprints, including both the Non-Public A 100-meter dash and 100 hurdles titles each of the past two seasons. And she’s the school record holder in both the 55 dash and the 100 dash.
She has also placed second at the Meet of Champions three times in the high hurdles (twice outdoors and once indoors), ran the 200 leg on the national record national record breaking Swedish Relay last June to win her second national title, ran on Union Catholic’s 4×400 relay that was the top American finisher at the Penn Relays, and she has helped lead the Vikings to numerous indoor and outdoor state and county team championships.
Union Catholic track and field coach Mike McCabe said Purdue is getting a great one in Chadwick.
“Amaya is one of the most decorated hurdlers and sprinters in UC history, and she’s been a dash/hurdle double winner multiple times,’’ said Coach McCabe. “Her dominance is clear within our county and state. She’s the top returning hurdlers in the state and one of the top returners in the 100 dash. Amaya is one of the very best track and field athletes in New Jersey.’’
Published November 8, 2017
Share